"My middle name is Records." We even got celebrities here.  WLS disk jockey John "Records" Landecker emcees the showing of "A Career Game", MSGA's Spring assembly.

Right on the bull's-eye! Getting the arrow on to the bow, getting ready for an attempt at hitting the center of the target.

Getting the golf clubs out to bring to the field house. After learning the basic skills, students practice for perfection. Weather records aren't broken often, yet seniors experienced two during their years at Morton East.  First, the blizzard of '79, and on this year the coldest day in Chicago's history. On Sunday, January 10th, the temperature fell to a record -26*F, which was accompanied by a -81*F wind chill.

At two p.m. radio stations began announcing school closings and Morton East's students listened to announcements about District 201, but they never came. Still on January 11th, 1,944 students and 33 teachers stayed home. It wasn't much of a school day for the 644 students who did come the next day.  Classes were dismissed after 2nd hour, at 10:10 because of the number of teachers that were absent. The following weekend the record low temperatures were challenged when the mercury dipped down to -25*F.

95 cents was the price of hot lunches at the beginning of the year. Prices changed from 55 cents to 95cents. However when the cafeteria was making a profit, the lunch prices were lowered to 90 cents. President Reagan's tax cut plan, designed to save money, caused a price raise. With the government cutbacks in spending, less money was available to schools, so saving money was necessary.

Ciceronians weren't the only ones who celebrated Cicero's 125th anniversary. Governor Jim Thompson and wife Jane flew in from Springfield for the occasion. The helicopter landed on the football field. 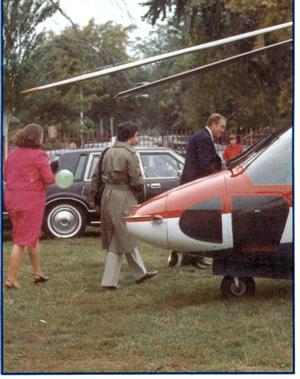 Where can one find telephones and electrical equipment that's more than 80 years old? They're part of the 4th largest museum in the state. The Cicero Historical Society has a three-year contract to house the Western Electric Museum at Morton East. Room 200 was converted into the museum. According to Mr. J.Leckel, the Hawthorne Works Committee put out $30,000 to move the museum to its new location. It was decided that most of the items were produced and developed in Cicero and nearby communities that it should stay in the area. The museum includes telephones and electrical equipment manufactured at Western Electric during its 80-year operation in Cicero. Other items such as toys, games and furniture were produced during the Depression. The museum also has an audio/visual display of much of Hawthorne Works, surrounding communities and the nation itself. It is now located at Morton College.

Between 1983 & 1985 , the Chicago Bears intermittently used Morton East for an indoor training facility, including their Super Bowl XX championship season. 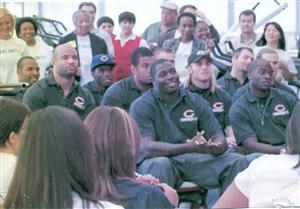 In 1985, Morton East & Morton West merged as one school district.  The new name for our school is J.Sterling Morton High School, East Campus. With the combining of the athletic programs came many questions. Questions about the mascot, color, and song. A committee made up of several people from Cicero, and Berwyn and one student from each school made the decisions as to what they would be. The school colors are maroon, green & white. The mascot is the Mustang. “Morton” is the alma mater song and the “Falcon Fight Song” as the game songs – words of both songs would be appropriately changed.

The merger produced several good teams. The Varsity Football team was DPVL champs, and the JV Volleyball team went undefeated to start off the year.

Requirements for graduation were made stricter, including raising the minimum number of credits from 18 to 22 for incoming freshmen. 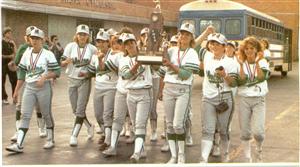 Victoriously showing off the state trophy they earned, the softball team proves that they made the grade.  This was the 6th state award for the school. A perfect record was marred when rain ended the Riverside-Brookfield game in a tie 1-1. Their final record was 38-0-1. 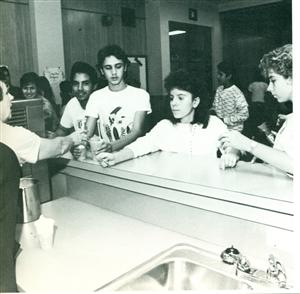 Every day over 2000 students goes to the cafeteria for lunch.

Changes ranged from ordinary to extraordinary this year. Some physical changes were made while new programs and policies were initiated by the students.

A seemingly ordinary, but necessary change was the replacement of doors in the athletic annex. The new doors were sturdier as well as tighter fitting for better insulation in the winter.

On the 3rd floor, a more noticeable change was made. Room 355, formerly a study hall, was divided into two parts, a lecture room and a computer lab, to accommodate an increasing enrollment in Computer Aided Drafting (CAD). In the library, a new computerized scanning system was made fully operational.

Some programs and policies adopted benefited the students more directly. Big Brother/Big Sister program was initiated by the MSGA. Operation Snowball also started. Allowing students to wear shorts for a time in hot weather was the most popular new move.