When we won the regionals, spirit broke loose. Morton rarely sees an impromptu rally and parade, but there they were! 8:30 AM students, gathering in corridors and hallways, were shouting "We're No. 1!" (before we were.) Soon afterwards, the Ticket Office was swamped. Soon the busses were loaded. On June 4th we defeated Pekin: our first crucial game; our opener.

In the semi-final rounds we screamed our way through a 5-1 win over Lane Tech. There we were, hoarse, excited, and still shouting "We're Number 1!" Once again the Ticket Office was swamped: people were in line until 10:30 PM. It seemed the Cubs were in Cicero.  June 5th,1970, 6:30 AM, busses and fans were ready to travel to Peoria.

A record sttting 11 innings ended with a 7 to 3 Mustang victory.

Unlike last years folk concert, this year's concert featured popular rock groups.  As the audience filed in, the Wild a local group, played several songs.  At 7:30 the house lights dimmed to black and an off-stage voice introduced the Aprocyphals.The Aprocryphals have done quite well since their beginning a few years ago. The group consists of Joe Mantegna, Chris Mantegna, Neal Sordelli, and Tom Massari.

Following the Aprocryphals, the Cryan' Shames were introduced. The Shames, who also had their start in Chicago, have continued to grow in popularity since the release of their first record, "Sugar and Spice".

The concert came to its climax with the introduction of the Robbs, who reached nation-wide fame with their regular appearance on the Dick Clark television show, "Where the Action Is."

Team of the Week. 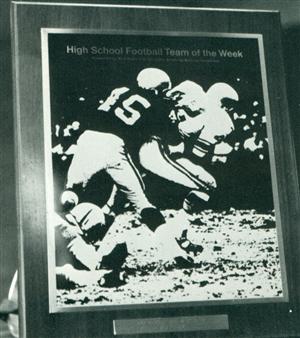 We are spirited! Cries of loyalty and encouragement were heard ringing through the air at sports events and through the halls. Our year started out with a visit from Fred Winston, WLS disc jockey, who presented our football team with the "WLS Team of the Week" award after we won a game for the first time in several years, beating Waukegan 12 to 8. 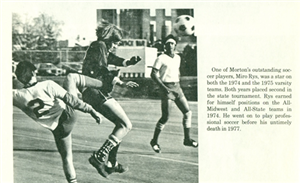 Although born in Czechoslovakia, Rys grew up in Cicero where he played high school soccer. Following his graduation in 1976, Rys elected to forego college and instead signed with the Chicago Sting of the North American Soccer League.  Rys played 17 games and scored 4 goals for the Chicago Sting that season. Rys then transferred to the Los Angeles Aztecs during the 1977 season. He played in 2 games, scoring 2 goals before signing with German club Hertha Berlin. Rys died in a car accident in Germany, however, before he played for Hertha Berlin. 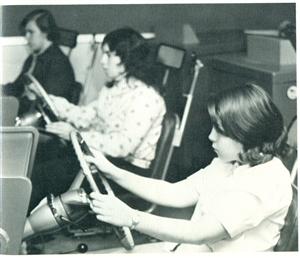 Signal for a left turn. Simulators help train students in what it'll be like be behind the wheel of a car while watching the film "Highway Driving."

Morton Junior College moved out in 1975 to its present location on 38th & Central Avenues. 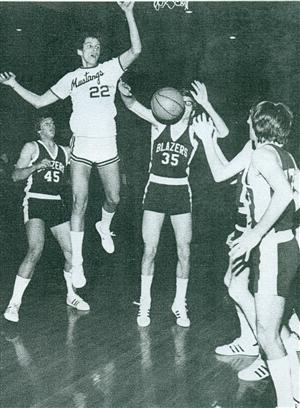 1975-1976 Winter Varsity Basketball season. Don Stumillo was the leading scorer in the league as well as on the team. He holds the record for most points scored in a game, 50, which were made at the Proviso West Christmas Tournament. He made the All-Des Plaines Valley League team. 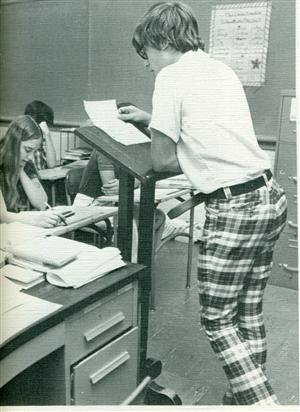 Since the Foreign or Modern Language Department's beginning in the mid 1890's, many changes have occurred. At first, Latin, Spanish, German, Russian, French, Czechoslovakian, and Italian were taught. In 1976, Spanish, German, French, Czechoslovakian, and Italian are the only foreign languages taught. In 2014, the only languages taught are Spanish and French. Consumer Education classes started in 1976, due to Illinois State requirement that all students are to receive instruction in consumer education.

Morton was chosen to represent the state of Illinois along with 4 other bands from the Midwest, to attend the Washington, D.C. Bicentennial Band trip. While there, they presented five concerts. 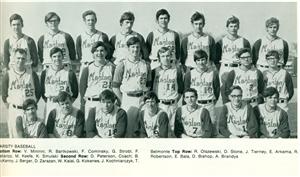 Edward Arkema, the top pitcher for Morton's baseball team, entered the minor leagues. He was drafted #7 by San Diego and signed with the Padres. 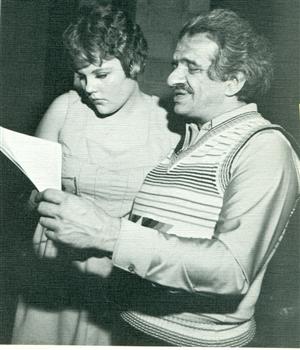 A man loved by many because of his hard work, dedication, and personality; Mr. G. J. Drew. The morning of opening night for "West Side Story," November 12th, 1977, Mr. Drew suffered a fatal heart attack. Some say his spirit haunts the auditorium. 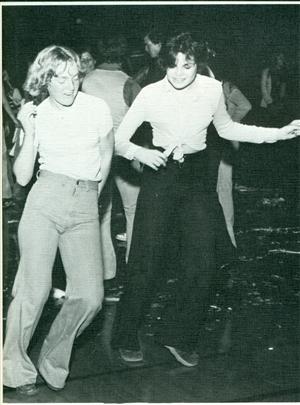 Gym area swells with rock sounds. All top bands had to start somewhere and that usually meant the bottom! We had many bands, sock hops and dances in the gym and field house.

In the era of women's rights and equality, the state thought that this equality should start in high school P.E. classes. Co-ed gym classes were created. The courses taught in these classes must not, according to Title IX, be contact sports.  Courses, such as badminton, volleyball, swimming, tumbling, and dance, to name a few, have been popular.

Republican presidential candidate Ronald Reagan honored Morton College and the community by attending a rally as an official candidate. Many students from Morton East attended the rally cheering him on.  "We don't need that kind of Teddy Care".. said president elect Reagan at the November 14, 1979, Morton College rally. 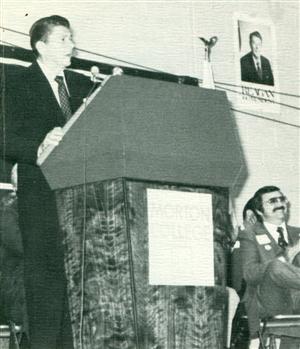