For the third consecutive time Morton's boxing team reigns supreme over the high schools of northern Illinois. They had victories in five of the eight weight divisions. 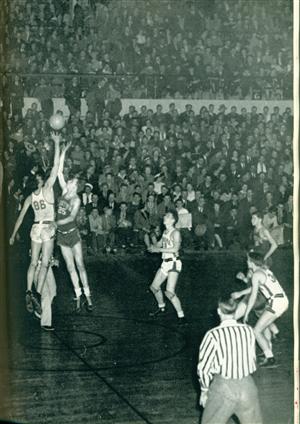 Morton Boys Basketball won state championship against Urbana by the score of 32-31.

The Soccer team won the State Championship title. Morton Wrestlers reached a new high when they took a 7th place in the state meet. Captain George Popelka won first place in the 155 pound class. He won 15 matches this year without a defeat.

Social Dancing in the Auditorium foyer

The first day of social dancing with boys is quite a thrill to the freshmen girls. Having danced little before, many are awkward, but after a few weeks of instruction, they show definite improvement: and at the end of the semester they have mastered the waltz and two-step.

The last day of school 3,500 fans turned out to watch the varsity Baseball team win the State Championship 4 to 2. The students bought 10 cent tags to bring East St. Louis to 31st and East Ave.

A Morton Student Bank was started with almost 1000 students starting accounts. The students that work at this time are attending a regular banking class. War is expensive. The United States spent more than $300 million fighting the Axis Powers and supplying our Allies. To help this effort, the Treasury Department offered Americans a series of War Bonds they could purchase during the war. You could purchase a $25 War Bond for $18.75 at the school bank. 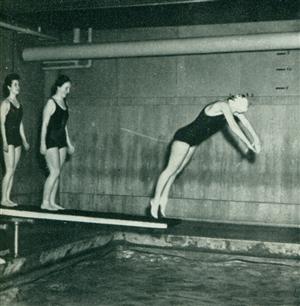 Before becoming a Life Guard, you must be an expert swimmer, and must be able to take a difficult "deep water" test. (Old Pool) 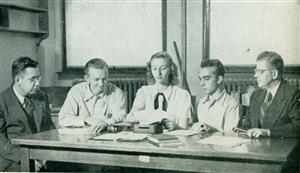 The Court of Justice is the judicial branch of our student government (MSGA), and it handles all civil and constitutional cases. When a student violates a rule, he is brought to one of the weekly meetings. The procedure followed is like that of the courts of our cities and states. If the defendant is found guilty after a fair trial, he is punished by being made to write a theme about certain given subject. If his grades are low, he is assigned to a study hall certain periods each day.

By having close cooperation with the Hall Committee the Court helps to make the students realize that they must obey school rules and regulations in order to have an excellent hall system that we can all be proud of. 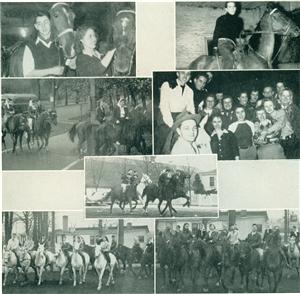 This club promotes the riding bug among the students and offers aid to those who wish to become proficient in the art. In addition to regular rides, there are hayrides, barn dances, and club get-togethers.