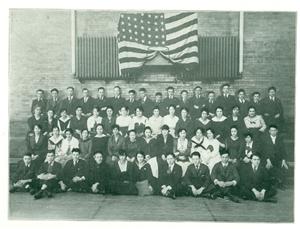 This cylinder press was used by print shop students in the 20's to produce the school's Maroon and White newspapers. 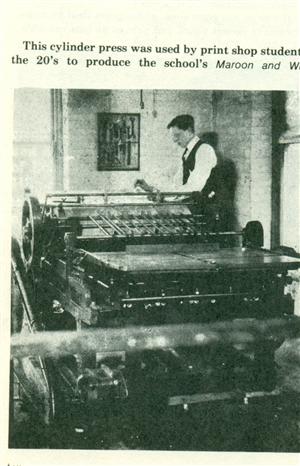 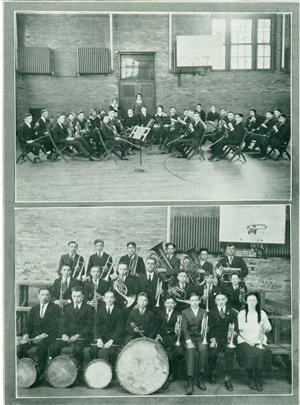 The J.S.M. branch of the Illinois Girls' Athletic League was organized at the beginning of this year by the gymnasium teachers, Miss Gyles, Miss Miller, and Miss Munn. This league is for the promotion of girls' athletics, both in and out of the school.

The boy's "M" club was founded.

Advertisement in the 1921 Yearbook! 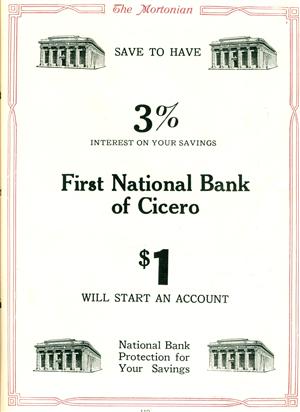 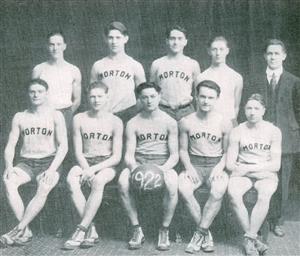 In 1924, Morton Junior College opened. It was the 2nd Junior College in the state and one of the first such colleges in the entire nation. It was the brain child of Morton High School's Superintendent Harry Victor Church who envisioned it as "a people's college with terminal courses for better citizenship as well as preparation for a university." Mr. Church believed students should pay neither for tuition nor for textbooks, and so Morton Junior College became the only school of its kind in the world to offer a free collegiate education.

In 1967, voters gave Morton College the go-ahead to separate from the high school. For the next few years, the college operated out of 12 storefronts along Cermak Road. April 8, 1972 a 5 million dollar bond was approved to build a new campus.They moved out in 1975 and are now located at 3800 S. Central Avenue.

Just as the building has grown , various departments have progressed accordingly. The music department had its beginning when Miss Silliman first taught singing in 1904. When first the suggestion was made that sewing be taught at Morton, the Board of Education thought it was unnecessary. Finally the class was started in November 1909. During the war the girls devoted all their time to sewing and knitting garments for the Red Cross. 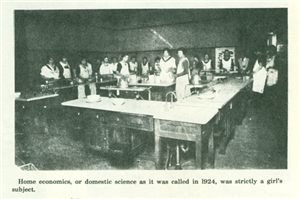 The cooking department had its beginning on February 1,1915.The first year there were about 60 junior and senior girls enrolled.

The art department had its beginning in a small, poorly-lighted room in the attic of the old building that burned in 1924.

Also in 1924, Mr. Church established an Orthopedic department. While reading school law, he discovered that there was a definite appropriation made for the education and care of crippled children. Mrs. Giles' senior sociology classes blocked out the district need for an orthopedic department. The two or three people for each division reported the number of cases, and the matter was presented to the Board of Education. The Board immediately decided to start the school in the fall . Under the direction of Miss Fette and with Mrs. Stockdale in charge of the academic work, the school for crippled children started its work on September 22, 1924, with four children enrolled. The second year that number grew to a membership of 27 students to forty-two at the end of the year.

During a basketball game in the school’s gym a major fire erupted. The auditorium, girls’ gymnasium, a library, and several classrooms and offices were lost. (The 1903 & 1908 buildings) The fire forced the school to temporarily move to a split schedule, with the 1,200 freshmen attending classes from 8-12:30 and the upperclassmen from 12:30-5p.m.

Finally , in 1925 the present mammoth addition circling the old building for two-thirds its perimeter, was finished.  All this was accomplished during the 25 years of Mr. Church's administration. He has looked into the future, has seen the need of a still larger establishment, and has pushed ahead plans for another equally large addition now under construction.

A 4 story fireproof addition, encircling the existing complex, was built including an auto mechanics lab, physical education workout room, 30 classrooms, art & biology labs and a Music wing. There also was a girl's gymnasium, a cafeteria seating 1500 students, Little Theatre and an auditorium having a capacity for 2500 persons, and a stage large enough for the playing of a basketball game. Ropes stretched across the front of the stage prevented players from falling in the Orchestra pit. This auditorium will be the first in the middle west of its kind.

In 1927, Morton’s boys basketball team won the “Interscholastic Championship of the United States". The tournament had been organized at the University of Chicago by Amos Alonzo Stagg. 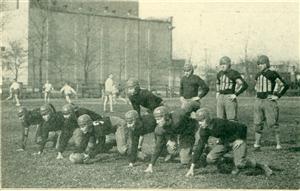 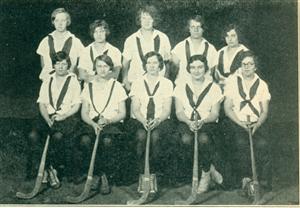 Hockey this year once more took its place among the girls' foremost sports at Morton. The team, a fast, heady, co-operative outfit, defeated the juniors for the championship in 2 hard fought games.

In 1929, the Board of Education initiated an Industrial Arts Program into Morton's curriculum. During World War II, Morton offered classes to the community both day and night to train those interested in working in factories. In 1970, the Industrial Arts Department split the vocational auto mechanics shops between the 2 Morton schools.  Auto shop is still available in 2014. 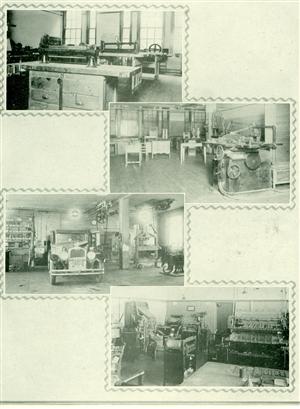