J.(Julius) Sterling Morton (1832-1902), was born in Adams, New York to storekeeper parents. Shortly after his birth the family moved West to Michigan. When Sterling was still a child, he met his future bride Caroline Joy French. They were married in 1854 and moved to the Western hills of the Missouri River Valley. In 1872 J.Sterling was concerned about the bareness of the plains area where they were living and founded Arbor Day. One of J. Sterling's famous quotes concerning Arbor Day was, "Other holidays repose on the past, but Arbor Day poses for the future." J.Sterling Morton was the Secretary of Agriculture under President Grover Cleveland.

In 1903 the new building on Austin Blvd opened. It was named J. Sterling Morton High School in honor of Julius Sterling Morton, originator of Arbor Day, governor of Nebraska in 1888, and Secretary of Agriculture under President Cleveland in 1893. 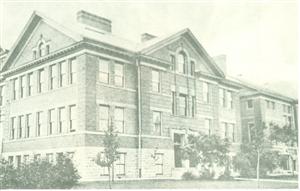 The first Morton High School stood at 25th and Austin Blvd.,ready for classes for the 1903-04 school year.

Both old buildings & the 1915 structure.

All this time, the community was growing steadily and it became necessary to build an addition to the original building. There were 300 students walking through the doors of Morton, with an additional 100 seven years later.

In 1908, an addition was built. A new gymnasium and assembly room were added, and soon after that the Austin Ave. annex was built, consisting of classrooms on Austin Ave., offices, sewing and manual training rooms, (The first sewing machine was purchased in 1919) chemistry, physics and biology laboratories, a community room, and a teachers’ rest room.

In 1915, the student population reached 400 and another addition was built. This annex which encircles the space occupied by the original building consists of classrooms, two libraries, a community room, sewing and manual training rooms, cooking rooms, a chemistry lab, physics & biology labs, a swimming pool, and a boys' gym. Morton was the first high school in all of America to have physical education for every student every day.

By 1917, the events of World War I were having an effect on the school. Students began raising vegetables on a 6 acre plot of land adjacent to the school in order to supply produce for the school lunch room in the autumn.

In 1918, after World War I, a rapid growth occurs and even more class space was built, this time it was fireproof.  As early as 1918, the Morton High School Board of Education, anticipating future needs, considered purchasing the current site of Morton West High School. However the land, then known as Gage Farm, was not for sale. In 1926 the district did purchase a 2 block area of land at Wisconsin Ave. & 29th street.

The 1st "Mortonian" Yearbook is published. 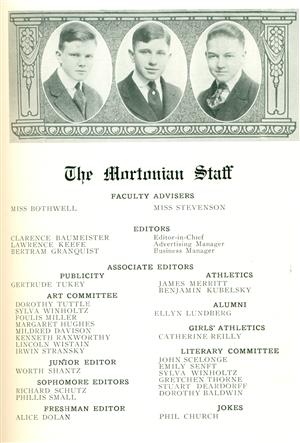 The notable record of J.S.M. in war activities was achieved through the time and labor put upon it by Mrs. Jean E. Bliss. In the sewing department, since America's entrance into the war until the end of January, 1919, the work was wholly refugee work. Miss Bliss went to the Chicago Red Cross and after much persuasion on her part, was given a bolt of cloth to cut and make into refugee garments. From then on material consisting of yarn for knitted goods, cotton flannel and woolen goods were obtained. In total they made 172 sweaters, 107 pairs of socks, 103 dresses, 100 boy's shirts, trousers, capes and caps that were worn by the French and Belgian peasant women and children.

Before the war our athletics took place on a large field the did not compare with the athletic fields of Chicago's suburbs. During the war our athletic grounds were a nicely furrowed corn patch. The athletic director, Mr. Pope and Mr. Millard, the school business manager, put through a project that Morton will have the finest athletic field of the suburbs. It will comprise of 7 acres of grass, with long rows of elm trees and shrubs surrounding the field.

In addition to our splendid athletic field Morton has one of the finest gymnasiums in the Middle West. It is 92 feet long and 79 feet wide. Its height, and the absence of posts and pillars, make the gymnasium an ideal place for basketball and indoor baseball. Although we have had a swimming pool for some time, this year is the first time we have been able to enter the Suburban Swimming meets. 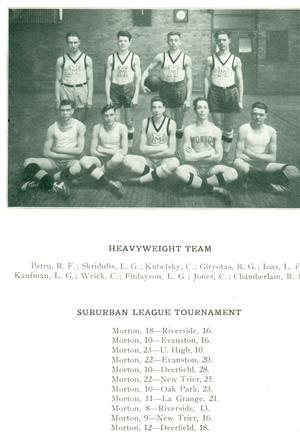