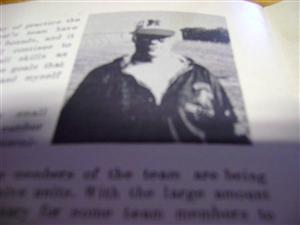 Who is Bill Vohaska?
Bill grew up in Berwyn and graduated Morton in 1947. He played football, wrestled, and swam. He twice finished third in the 165-pound division at the state wrestling meet. Bill received a football scholarship to attend the University of Illinois where he played football, wrestled and was a nationally ranked pole vaulter.
As an 182- pound offensive center Bill lettered three years at Illinois and was the team captain his senior year and earned all-Big Ten honors, as Illinois went 7-2 and was ranked in the top ten in the nation. Bill was named to the Associated Press All-American First Team. Illinois football coach Pete Elliot said Bill “is the finest player he ever worked with. He’s a hustler and a perfectionist.” Bill was also an outstanding wrestler at Illinois and nationally ranked pole vaulter.
Bill returned to Morton High School and College and coached football, wrestling, and track. Bill retired in 1994.” Bill Vohaska was my football coach, and I would have run through a wall for him." (Dwight Pawlowski 1962)