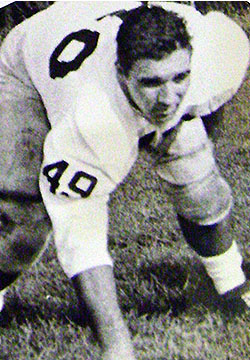 Who is Ray Marcin?
Ray Marcin was born June 22, 1944 and grew up in Cicero living at 54th and 23rd place. He attended Sherman and Wilson grade schools. Ray’s mother was Bohemian and his father Polish. His favorite coaches were Ken Geiger (football), Dick Kucera (baseball), Wally Johnson (baseball) and the legendary Jim Rexilius (track).

Being a well-rounded athlete, Ray received much recognition for his impressive athletic performance. As a junior, he was a helped his fellow Mustangs win the 1961 Baseball State Championship. During his senior year at Morton, Ray was an All State Athlete and a High School All American in football, and an all-conference in Baseball. While on the track team, Ray was a shot-putter and placed 3rd in the 1962 State Track Meet with a toss of 59’9”.

After graduating from Morton, Ray received a football scholarship to the University of Wisconsin. From 1963 to 1965, he played starting offensive guard and was a linebacker on the university’s team, where he received the prestigious 1965 Savage Award for “Outstanding Defensive Player”.

Ray currently resides in Madison, Wisconsin with his wife Judy.