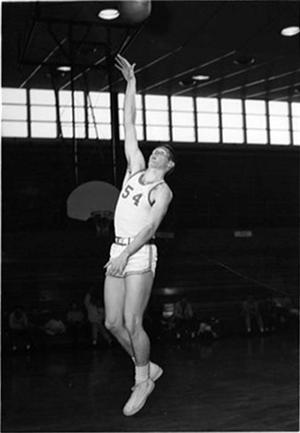 Who is Larry Mack?
Larry Mack was born July 23, 1943 and his family resided in the Grant Works area of Cicero, present-day area of 50th Avenue and 16th Street. He was the fourth Mack to attend Morton High School, his father Ray, along with his two brothers were also Morton graduates.

Larry was a proud Mustang who played on the football, basketball, and baseball team throughout his high school career. He received several recognitions during his time at Morton; All Surbaban League End for football, All Suburban League, All Chicago and All State Illinois for basketball, and helped Morton win the 1961 State Champoinshop for baseball. Larry was also featured in
an article in Sports Illustrated; "Faces in the Crowd" (June 19, 1961).

After graduating from Morton, Larry went onto the U.S. Navy Academy in Annapolis, Maryland, where he graduated in 1965. During his time there he was captain of his basketball team
and played on the varsity baseball team.

After two years in the U.S. Navy, Larry became a Naval Aviator in 1967 and flew a P-3 Orion Sub-Chaser for three years until his leave in 1970.